This site is operated by a business or businesses owned by Informa PLC and all copyright resides with them. Informa PLC’s registered office is 5 Howick Place, London SW1P 1WG. Registered in England and Wales. Number 8860726
Informa
Home / News & Media / Industry News / Asia PVC markets hover around record-highs, but pace of gains slows

In Asia, import PVC prices have remained at all-time high levels after a major Taiwanese producer’s May pricing. Having been the 12th consecutive monthly hike from the major, the amount was more moderate this time in line with market expectations.

The major producer applied a massive hike of $300/ton on its PVC K67-68 offers to Asia markets for April while May indicated only a $30/ton increase.

Growing buying resistance particularly in China and Southeast Asia, a slowdown in market activity during Ramadan, and fresh COVID-19 outbreaks in India and Southeast Asia have been cited among the main factors slowing the pace of hikes.

ChemOrbis Price Index reveals that the weekly averages of import PVC K67 offers are currently standing at $1550/ton CIF China/SEA, and $1690/ton CIF India, indicating the highest levels since records dating back to 2008. 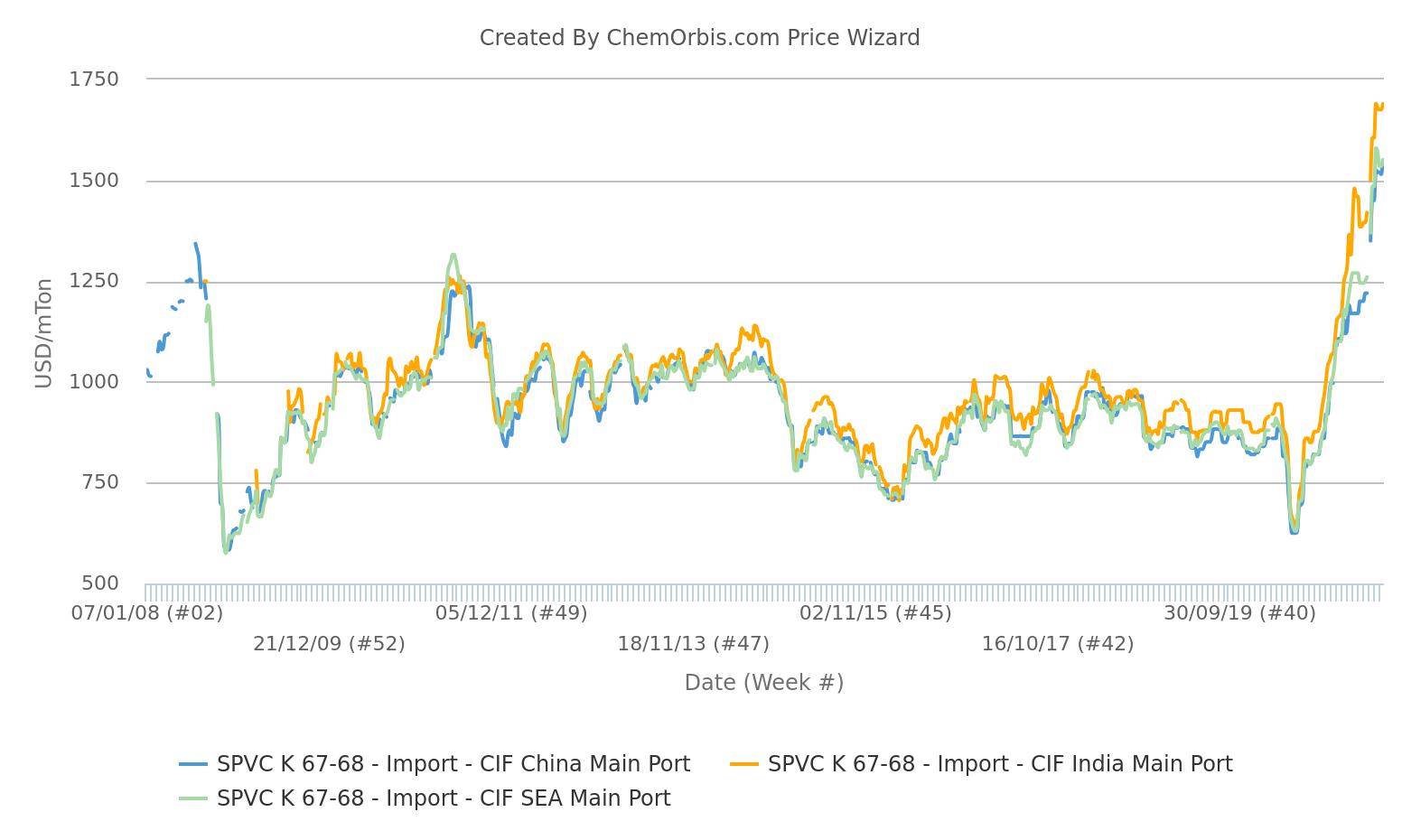 Several Northeast Asian producers also followed the footsteps of the Taiwanese major, applying $30-40/ton increases on their May PVC K67 offers to regional markets this week.

The lack of US PVC K67 offers amid winter-related production disruptions, coupled with plant shutdowns in Asia have kept both regional and global availability short. Rallying shipping costs have added to supply issues, leading to another round of hikes, but modest ones.

Meanwhile, regarding the absence of US PVC K67 offers, a source from a Japanese producer commented, “With global and regional PVC supply likely to remain tight for the first half of 2021, producers believe the higher price levels should hold. We think there may be downward pressure on global and Asian PVC markets in July once US cargoes head towards Asia, as well as the other global regions.”

Taiwanese major yet to sell out in China

Unlike earlier months, the major producer is reportedly yet to sell out its May allocation to China at the time of press. This reflects growing resistance on the buyers’ side in the country.

Although this week local China PVC prices have posted slight gains with support from the firming trend in the import market, they were on a downtrend since mid-March due to weak demand.

On a side note, a trader reported offering US PVC K67 at $1700/ton CIF, cash. This level indicated a notable increase of $250/ton from early March levels. “We are waiting for customers to place bids. However, we don’t think any done deal will be achieved at our latest level as it stands well above the Taiwanese major’s May level at $1540/ton CIF,” he noted.

After India’s first battle with COVID-19 infections in September 2020, the number of new COVID-19 cases have started to soar in the country again since last month and the situation has gotten worse since last week. India is now facing more new daily infections than last year’s peak levels despite vaccination efforts.

Mumbai and other parts of Maharashtra, the Indian state worst hit by the pandemic, face stricter restrictions for 15 days starting on April 14 in an effort to stem the surge of coronavirus infections.

The second wave of the virus has resulted in a slowdown in PVC demand, market players concur.

Adding to the slowing market activity is the onset of Ramadan – the Muslim fasting month. Fasting is observed among India’s 200 million Muslims as well as neighboring nations such as Bangladesh and Pakistan. It is also observed in Indonesia and Malaysia as well as among Muslims in other parts of Southeast Asia.

Players anticipate slacker demand from the region during the Ramadan season, which lasts for a month and is followed by Eid holidays.