Texas oil producers and refiners remained shut for a fifth day on Wednesday after several days of blistering cold, and the governor ordered a ban on natural gas exports from the state to try to speed the restoration of power.

Alvin Williams, 66, checks on his smartphone while taking a shelter at Gallery Furniture store which opened its door and transformed into a warming station after winter weather caused electricity blackouts in Houston, Texas, U.S. February 17, 2021. REUTERS/Go Nakamura

The cold snap, which has killed at least 21 people and knocked out power to more than 4 million people in Texas, is not expected to let up until this weekend.

Governor Greg Abbott directed Texas natural gas providers not to ship outside the state until Sunday and asked the state energy regulator to enforce his export ban.

“That will also increase the power that’s going to be produced and sent to homes here in Texas,” Abbott said at a news conference Wednesday.

The ban prompted a response from officials in Mexico, which relies on imports via pipeline from Texas. More than 40% of U.S. natural gas exports come from Texas.

Texas produces more natural gas and oil than any other U.S. state, and its operators, unlike those in North Dakota or Alaska, are not used to dealing with frigid temperatures.

The state accounts for roughly one-quarter of U.S. natural gas production, about 27.8 billion cubic feet per day, but it consumes only part of that, shipping the rest to other states or via pipeline to Mexico, according to the U.S. Energy Information Administration.

Texas’ energy sector has been hit hard by the cold, with about 4 million barrels per day (bpd) of daily refining capacity shuttered and at least 1 million bpd of oil production out as well.

Natural gas output also slumped. At this time a week ago, Texas was producing about 7.9 billion cubic feet per day, but that fell to 1.9 billion on Wednesday, according to preliminary data from Refinitiv Eikon. Natural gas accounts for half of Texas’ power generation.

Christi Craddick, chair of the Texas Railroad Commission, the state’s oil and gas regulator, said late Wednesday the agency had received the governor’s request and was reviewing it.

The request set up a game of political football, according to a person familiar with the matter, between groups that do not have the authority to interfere with interstate commerce.

U.S. gas pipeline exports to Mexico dropped to 3.8 billion cubic feet (bcf) per day on Wednesday, down from an average over the past 30 days of 5.7 bcf, according to data from Refinitiv, about three-quarters of which comes from Texas.

Mexico’s economy minister, Tatiana Clouthier, said Wednesday she had contacted the U.S. government’s representative in Mexico, seeking to guarantee supplies of natural gas for Mexico during the cold snap.

“By not acting together, the results could be more complicated,” she said on Twitter.

One cargo of liquefied natural gas (LNG) loaded at Freeport LNG in Texas on Wednesday had been slated to sail to Mexico, according to Refinitiv Eikon data. The tanker remained off the coast of Texas. A Freeport LNG spokeswoman declined to comment.

Operations at Cheniere Energy’s Corpus Christi plant, the state’s largest LNG producer, were halted by weather disruptions this week. A spokesman declined to comment on the governor’s order.

Overall, daily U.S. natural gas production is down by roughly 19% from the end of last week to 71.9 bcf per day on Wednesday, according to preliminary Eikon data.

“The second half of this week is shaping up to be just as tumultuous as the long weekend, and natural gas prices could continue to top triple digits before the weekend,” she said.

Several Texas ports, including Houston, Galveston and key LNG exporting sites at Freeport and Sabine Pass were closed due to weather, according to U.S. Coast Guard Petty Officer Jonathan Lally.

One bcf of gas can supply about 5 million U.S. homes per day.

Producers in the Permian Basin, the largest U.S. oilfield, said electrical outages were the main issue, and that until power was restored, restarting any frozen equipment would be challenging.

Roughly 1 million bpd of crude production has been halted, according to Wood Mackenzie analysts, and it could be weeks before it is fully restored.

The supply disruptions drove further increases in oil prices, which ended the session up more than 1.5%. U.S. natural gas climbed to a more than three-month high after rising more than 10% on Tuesday.

Net Canadian exports have jumped above 7.5 bcf a day for the last couple of days and Archer estimated they were close to 8 bcf per day on Wednesday.

“We are seeing just absolutely huge withdrawals and exports to the U.S.,” Archer said. 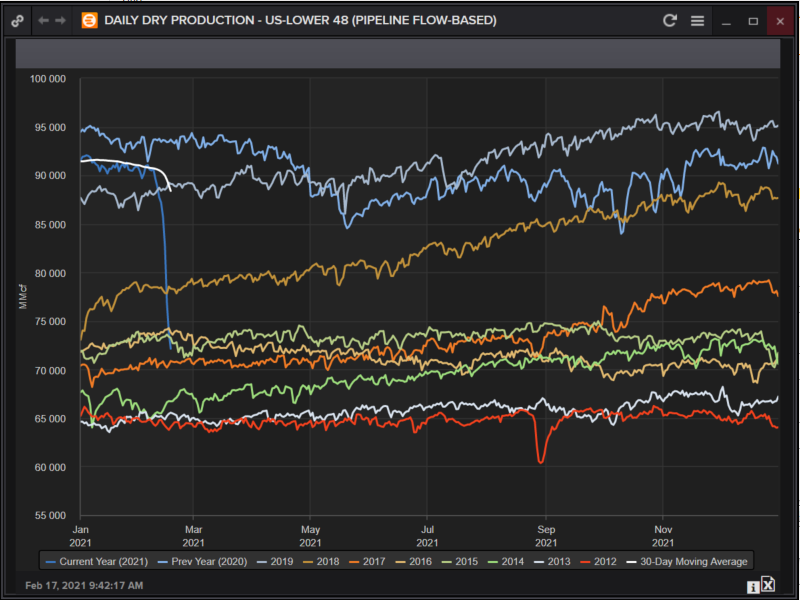